Happy Anniversay to all the lovely WOYWWers around the globe!  Congrats to Julia for coming up with the idea and keeping it going strong for four years now!   For those not in the know WOYWW stands for What's on Your Workdesk Wednesday.   Creative people from all over the world share their crafty space and what they are currently working on.  It's so much fun!  Visit Julia at Stamping Ground to get in on the action!

I'm on vacation but my friend so kindly let me use her computer!  Yay.  I didn't want to miss this special week.

Since I'm away my desk is looking a bit different.  Here's some pics of where I'm at. 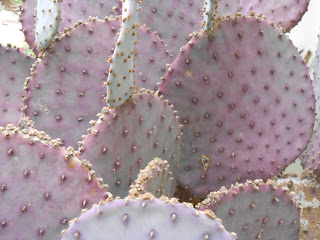 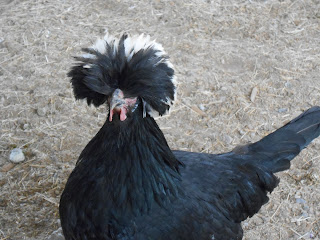 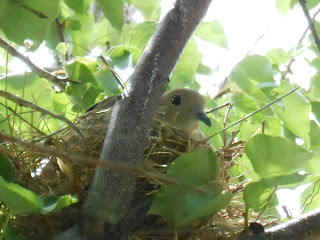 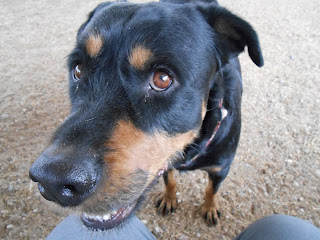 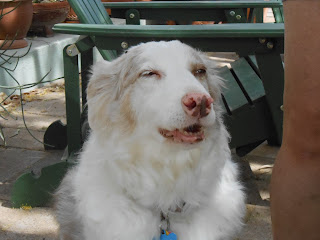 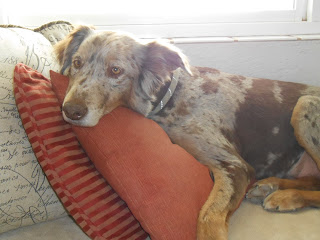 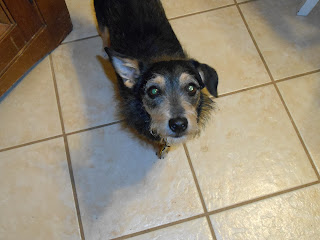 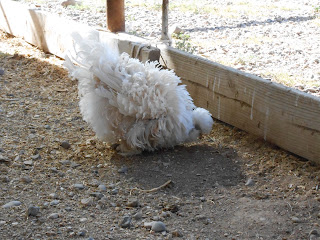 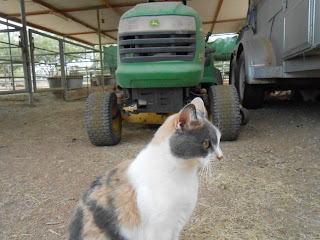 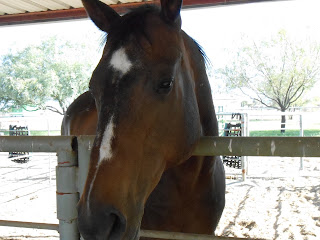 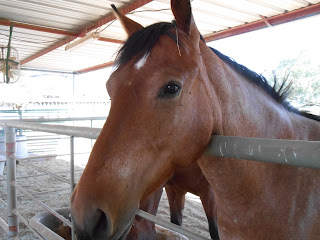 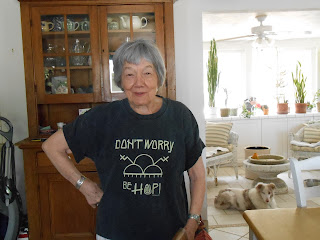 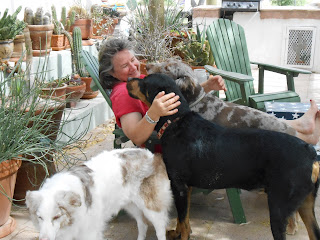 Thanks to Ginny and Janet for having me!  Besides spending time with the animals I've been watching Downton Abbey - we watched Season One and Two and have started Season Tree.

If we've talked about swapping ATCs I will have mine in the mail more than likely the second week of June.  IF I had my act together I'd have done them before I went on vacation.... oh, but that's just too organized for me!

As always, I will visit those of you that leave a comment (please include your number) and those that end in the same number as me.  I won't be around probably till the weekend so don't despair.

Welcome to WOYWW.  For those of you not familiar with WOYWW (What's On Your Workdesk Wednesday) it was started by Julia at Stamping Ground.  The four year anniversary is next week.  Congrats to Julia and to all that participate.  I have been blessed to meet some fantastic people through WOYWW.  I only wish I could attend the crop!

Read about the Anniversary ATC swap HERE.  I've committed to some of you already about swapping -- if I did please step forward!  Can you tell that I've lost my list?  Yep, total airhead.  If you'd like to swap please let me know in your comment.  I will be on vacation through the end of May so mine won't be mailed until the first part of June.

A few weeks ago I mentioned that I'd lost my thumb drive; which I found this weekend!  There were a lot of people that weren't familiar with them.  I have the majority of my photos downloaded onto it.
As for my desk.  I felted my purse and here it is.  The unfelted bag measured 13 inches long.  Imagine my dismay that it shrank up to around 9 inches!  I wanted it to be a bit deeper.  The handles, on the other hand, didn't shrink up nearly the same.

Thanks for visiting me!  I will visit those that visit me and also those that end in the same number.  After that then I'll drop in on others as I can.

Hello everyone!  I've been gone for a while but hopefully will soon be blogging again with some regularity.  I can't believe it's been over a week since my last post.

There's a cute little store here called The Perch Paperie and I was lucky enough to teach my first mixed media class there yesterday.  I had a blast!!!  I created a canvas inspired by something the owner of the shop had seen.  It was a big canvas (11 x 14) - well, that's big for me anyway.
Here's some photos from the class.

I encouraged everyone to create whatever they wanted.  It was fun seeing what each one of them came up with!
Thank you ladies, for making it so much fun!

Hello all!  It's another WOYWW (What's on Your Workdesk Wednesday).   WOYWW is the brainchild of Julia at Stamping Ground.  It's an amazing gathering of creative people from all over the world.  Who knows, you may want to join in the fun!

I've been a bit MIA -- trying to figure out some things.  Not sure exactly which direction to go  -- not only in life but with my crafting.

I've been knitting - my favorite evening past time.  On my needles is a purse using 100% wool, along with some ribbon yarn.  It'll be interesting to see how it looks once it's felted.   For those of you that don't know, felting is the process of washing the finished knitted item in hot water, throwing it in the dryer, causing the yarn to shrink.  It becomes almost like a fabric. 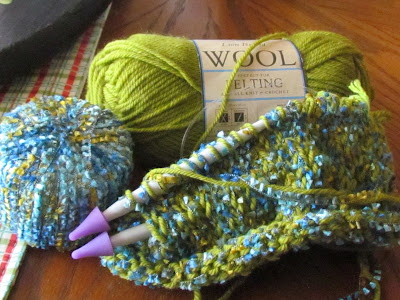 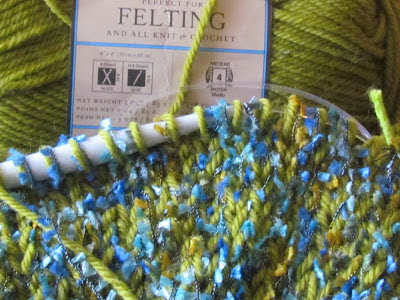 Also on my desk is happy mail from Nikki.  You can visit her at Graphix and Designs.  I love my adorable little card and the ATC.  The envelope was full of goodies!  Thank you Nikki!!
Peace,
Kay
Posted by 505whimsygirl at Tuesday, May 07, 2013 52 comments:

More of Tierra Wools and a Possible Star Sighting.....

Hi all.  I thought I'd share some more photos from the Tierra Wools Festival.  It was a day of fun; full of looking at yarn, feeling different textures, and maybe even a star sighting. 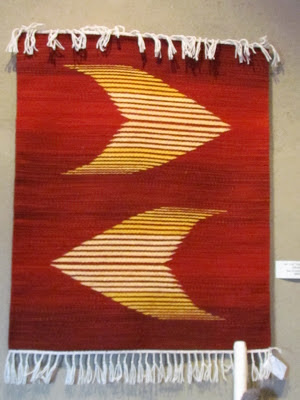 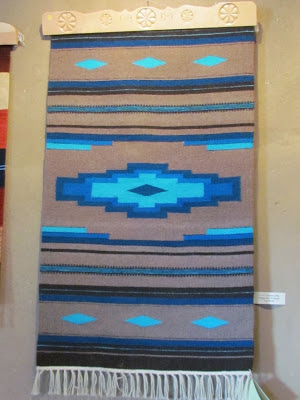 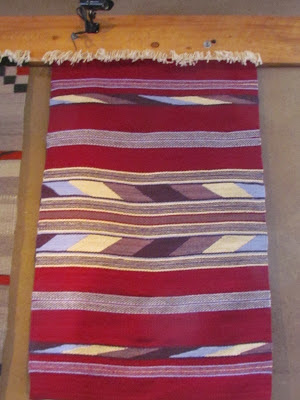 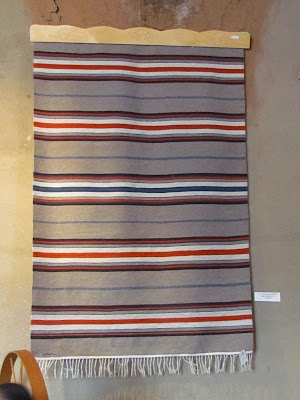 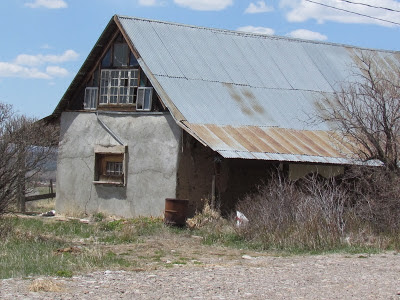 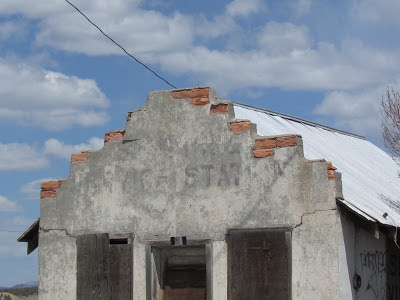 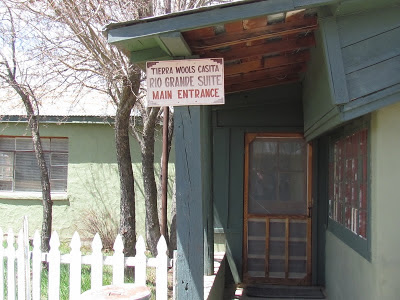 Do you know who Josh Brolin is?  Could this be him?  I felt like a stalker, waiting for the perfect photo op...... 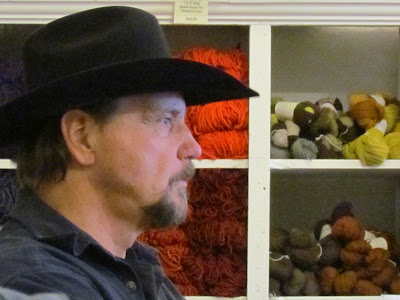 Only to learn that he's an attorney in Chama, New Mexico.  Below is the real Josh Brolin.  Now, can you see why I was fooled?

Some of his more recent films include "Gangster Squad," "Men in Black 3," "No Country for Old Men" and "True Grit."  The last two movies had parts of them filmed in New Mexico.  I've also since learned that his father, James Brolin is known to hang out around Santa Fe.  Holy moly, imagine my heart skipping a beat!

505whimsygirl
New Mexico, United States
Thanks for stopping by my blog! I hope you enjoy your visit. If you like what you see don't forget to subscribe!